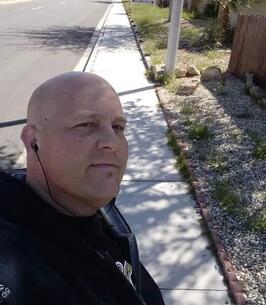 Memorial Candles Lit for Christopher | SEE ALL
Light a Candle
"We are honored to provide this Book of Memories to the family."
— The Highlands Funeral Home
Funeral Details Condolences & Tributes Photos, Videos & Stories Send Flowers

He is survived by his beautiful wife Rachel Childress, three daughters Alysta Clapham, Alissa Dotson, and Olivia Dotson, and a son Gavin Dotson. Also, surviving Christopher is his mother and stepfather Susan and Olav Tryggvason, his brother and sister, Michael Clapham and Erin Kent as well as his nieces and nephew. He also leaves behind so many friends, both new and old that loved him so dearly.

Christopher was always making people laugh with his inappropriate jokes and dark sense of humor. Everyone that knew him loved him, loved his laugh and loved laughing with him until there were tears in his eyes. He will be remembered most of all for that sense of humor, and that is exactly how he would want it.

He was a simplistic man, not needing much to be happy. He took the days as they came, one day at a time and always said, “keep your head where your feet are at,” because he believed strongly in living in the moment. A few of his favorite ways to spend time were watching funny movies, eating good food, being with family, reading and spoiling his dog, Sophie, who he adored more than words could express. Some of his favorite things outside of home were going to see movies in the theater or at the drive-in, walking the streets of Barstow while listening to music, and going out in the desert to shoot his guns when he got the chance.

He was never one to judge and had the best way with words, which was a gift he had that inspired all of us. He endured so much hardship and pain in his life, but he turned that into wisdom and new material for his lifelong comedian act. He was so welcoming, easy to talk to and ready to offer his experience to anyone. He believed that making mistakes is the best way a person could learn and encouraged others to live out every dream they had. He would say, “you won’t know until you do it.” These characteristics are what made him not only an incredible person, but an amazing father.

There is a quote in his favorite book by his favorite author, Steven King, that really sums up Christopher’s way of thinking. It goes, “No one can tell what goes on in between the person you were and the person you become… There are no maps of the change. You just come out the other side. Or you don’t.” A huge part of Christopher’s life was his sobriety. At the time of his passing, he was two and a half years clean and sober, which would mean the world to him. Surviving him is his AA/NA sponsor and his clean and sober men’s group who all meant so much to him. They helped get him to where he was, and his sobriety birthday was much more valuable to him than even his own and the only birthday he loved to celebrate, September 05, 2018.

Saturday March 6, 2021 from 5pm -8pm. we will be coming together casually at The Highlands Funeral Home to memorialize him in the best way we can, with funny stories and our favorite memories because everyone that knew him has some. The home will be accepting flowers for anyone who would like to send them. Light refreshments and drinks provided.


To send flowers to the family of Christopher Michael Clapham, please visit our Heartfelt Sympathies Store.