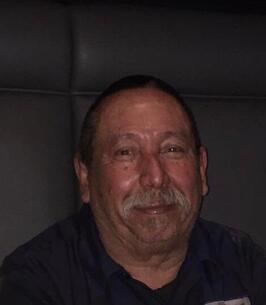 Memorial Candles Lit for John | SEE ALL
Light a Candle
"We are honored to provide this Book of Memories to the family."
— The Highlands Funeral Home
Funeral Details Condolences & Tributes Photos, Videos & Stories Send Flowers

John Robert Ramirez Jr was born on July 15, 1956 in Fresno, California and passed away in death in Barstow, California on December 28, 2020.
In 1976, John meet Marta Garcia and they were married in October of 1977. Shortly after, the couple welcomed their first daughter, Christy, followed by Irene and Daniella. In 1989, John finally got his son, John Robert Ramirez III “Chico”. John was a devoted father and would later become a devoted grandfather to Delilah, Isis, Moses, Catalina, Nicholas, Jeniveve, Destiny and Alan. John loved spending time with his grandchildren. John expressed that there was nothing a grandfather would not do for his grandchildren and throughout the years those words always rang true.
John lived 1000 years in the 64 years he spent on earth. John was full of life and always ready for a good time, lovingly referred to as the “Old Man” by those that adored him. John could often be found with his favorite red can of Budweiser in his hand and supporting his beloved Raiders. John loved the outdoors and one of his favorite past times was camping with his family whether it be in the desert or their annual trip to Shaver Lake. John was also known for his loyalty and work ethic, he spent many of his years in Fresno working for Zacky Farms and later retired from American Towing where he worked as a diesel mechanic.
John left a legacy behind and is sadly missed by many including his wife, children, grandchildren, sisters Cynthia and Linda, brothers Paul and David, and a host of loving in-laws, nieces and nephews, cousins and longtime friends. John was preceded in death by his father John Ramirez, mother Irene DeHaro, and brother David Skaggs.
Friends are invited to share their memories of John at a Celebration of Life to be held in the upcoming weeks in Barstow, CA. John’s final resting place will be at St Peter’s cemetery in Fresno, CA. Arrangements to be announced as they become available.

Click here to sign up for notifications about information and event scheduling for John Robert Ramirez, Jr.