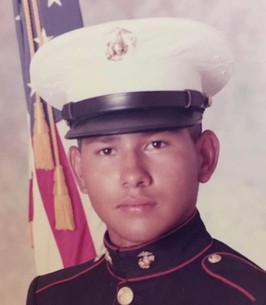 Memorial Candles Lit for Patrick | SEE ALL
Light a Candle
"We are honored to provide this Book of Memories to the family."
— The Highlands Funeral Home
Funeral Details Condolences & Tributes Photos, Videos & Stories Send Flowers

A beloved Husband, Father, Grandfather. He was a friend to
The Barstow Community, friend to many, and a good Marine.

He was born on March 17th, 1954 in Chicago, Illinois, he was preceded in death by his parents, Alberto and Esther Aleman.

He joined the United States Marine Corps in 1972. Throughout his military career, he worked as a Chaplain’s Clerk, and Supplyman. He was very hard working throughout his service. He married Imelda Aleman on February 23, 1974, and had three wonderful children, Brian Aleman, Hillary Gutierrez (Son-in-law, Art Gutierrez), and Daniel Aleman. After his honorable discharge in 1978, he was employed by MCLB in Yermo for 39 years, retiring in 2017. Throughout working and his retirement, he was very active in politics for his local community here in Barstow, California.

When he wasn’t working or at council meetings, he was always running errands with his wife, spending time with his children and spoiling his grandchildren. He was a big family man, a great friend, and someone you can always call. He is and will be missed greatly.

Semper Fidelis Patrick, as you join so many other Marines guarding the streets of Heaven.

To send flowers to the family of Patrick Aleman, please visit our Heartfelt Sympathies Store.