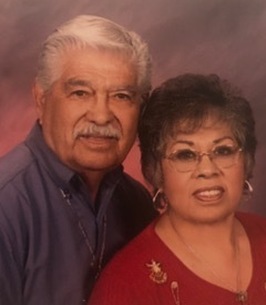 Memorial Candles Lit for Raul | SEE ALL
Light a Candle
"We are honored to provide this Book of Memories to the family."
— The Highlands Funeral Home
Funeral Details Condolences & Tributes Photos, Videos & Stories Send Flowers

Raul Bañuelos Najera was born on April 22, 1927, and he entered into eternal rest with our Lord on December 18, 2020. Raul was a U.S. Army veteran, serving from 1945-1946 as a radio operator, and then went on to work at the Marine Corps Logistics Base for many years. In his retirement he enjoyed playing sudoku, playing the scratcher lotto tickets, going to Nevada state line, and spending time with his children, grandchildren, wife, and friends all of whom he loved very much. Raul was an active community member in Barstow and was fondly known as “The Cookie Man” at the Rimrock Villa Convalescent Hospital, where he spent 21 years bringing cookies to the patients and visiting with as many people as he could as well as holding a communion service. He was also a dedicated donor to the Lifestream Blood Bank and donated 21 gallons of blood. Raul was a devout Catholic and served as a Eucharistic Minister, taking communion and visiting with those who were unable to attend mass. He was also active in Catholic organizations, such as the St. Philip Neri Men’s Club, where he served as president, and the local chapter of the Knights of Columbus, where he attained the rank of 3rd degree. Raul was especially dedicated to the Blessed Mother, the rosary, and the Divine Mercy Chaplet, and he also spent many years making hundreds of rosaries and sending them all over the world. Raul is preceded in death by his parents, Mr. and Mrs. Ignacio and Petra Najera; his siblings Georgia Najera, Julio Najera, Petra Huerta, Maria Cisneros, Virginia Reyes, and Lucy Najera; his daughter Martha Najera; his first wife, Manuela; and his second wife Doris. Raul is survived by his wife Sally Najera; his children Joe and Estelle Najera, Lillian Garcia, Maria “Blondie”, and Ronnie Gonzales, Anna Najera Yolanda Granados, Raul Najera Jr., Dennis and Bonny Nelson, Randy and Jean Nelson, and Ron and Patty Nelson; and his siblings Antonio “Tito” Najera, Frances and George Roum, Danny and Theresa Gonzalez, Condi and Bernard Villalobos, Dolores Gonzales, and Antonia Perez. Raul is also survived by 24 grandchildren, 30 great-grandchildren, 4 great-great-grandchildren, as well as many nieces, nephews, friends, and godchildren.

To send flowers to the family of Raul Najera, please visit our Heartfelt Sympathies Store.